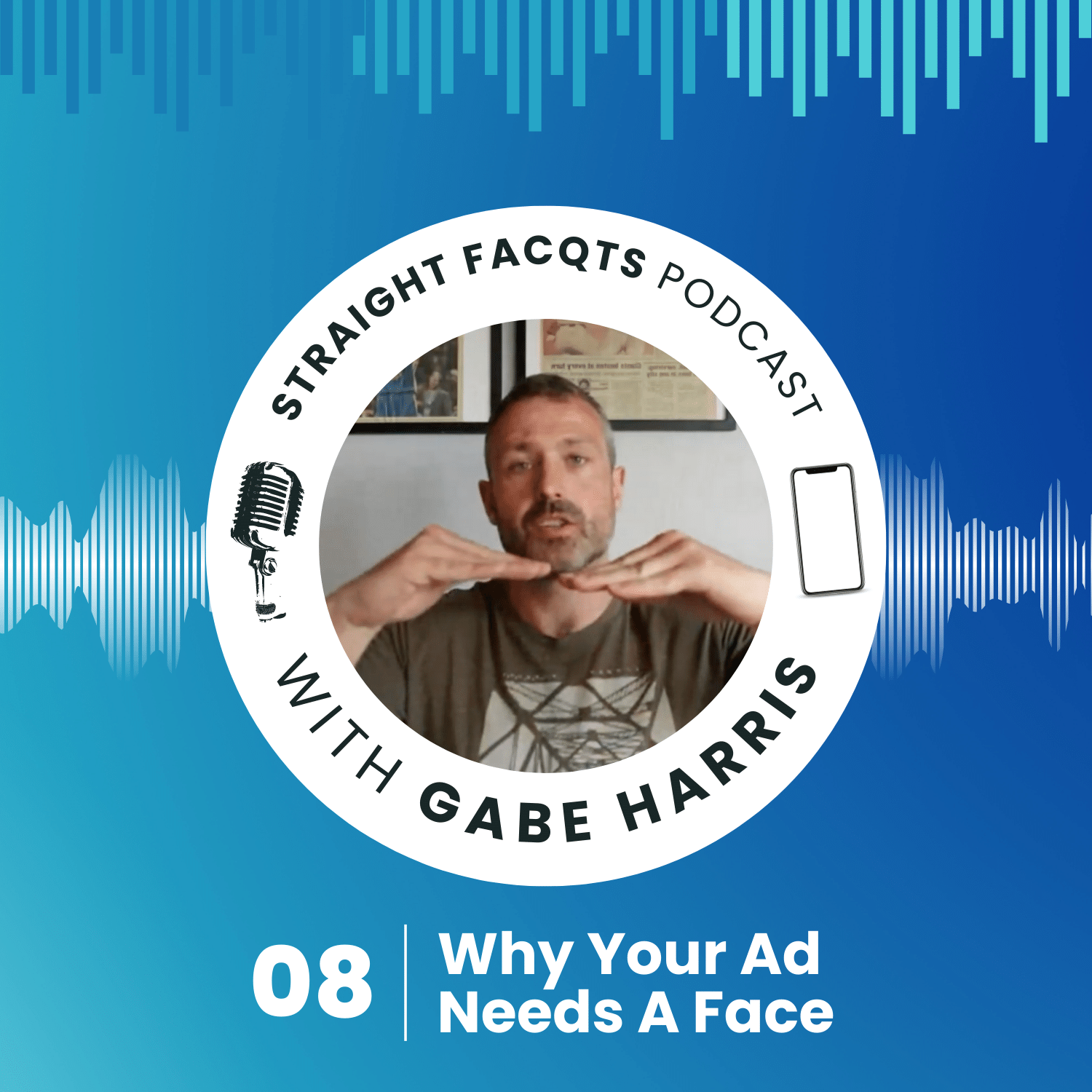 Why Your Ad Needs A Face

On this episode, we’re facing the facts and talking about why it’s so important to use a face in your social media advertising for your images and video. Here are a few reasons why your ad needs a face.

Hey, what’s going on? My name is Gabe, founder at Facqt, and this is Straight Facqts where we have honest conversations about how social media works and doesn’t work, so you can be able to better scale your business on these platforms.

To get down to it, the reason why faces are so important is you’re paying for every single impression.

On mobile, the average audience is able to consume your ad within 1.7 seconds. Since you’re paying for every single impression, and they’re just zooming by and most likely aren’t going to interact with your ad, you have to do whatever you can to be able to actually stop them from scrolling. You need to get them to engage, get them to click, and get them within your funnel.

“Having a human face is one of the biggest disruptors you can have to capture your audience’s attention.”

Now, that doesn’t mean you should do clickbaits. If you’re a good advertiser or a good marketer, you’d understand that clickbait is going to devalue your brand. In turn, that means that your campaign wasn’t as profitable.

When we’re talking about having a face, this means leading with that face. So you may have a human face in your video, but maybe it takes three, four, five, or six seconds to show up. Therefore, you always want to lead that video with a human face.

“91% of ads featuring a human face is going to attract more attention than an ad without it.”

The reason why is 91% of ads featuring a human face is going to attract more attention than an ad without it.

Well, yes, there may be some occurrences where you have a very engaging video or image (good luck on that) that doesn’t have a human face, and it’s totally worth testing.

Predominantly though, you need to make sure you have a human face right from the get-go. This is going to capture your audience’s attention because 91% of ads featuring a human face perform better. That is a ginormous leap.

So, there may be something that you have that’s specific to your product or service that you think, “this is bomb diggity, let’s do it.” 100%, you should test that. You should always be testing.

“For every ad, use your face.”

If you’re not using a human face, it can be very easy to be sloppy in your storytelling.

If you’re starting out or even if you’re not, and you make a selfie video talking about your product or service like a video that takes 20 or 30 seconds to make (minus the outtakes), there’s a good likelihood that video of you is going to outperform something that you may have worked on for the past two weeks.

Moreover, when you’re working on something very strategically, you want to be able to storyboard it. So, that strategy is your best foot forward. But when testing, do a selfie video as well.

You’re starting with your face, you’re getting brand recognition. You’re gaining the audience’s trust as well because you’re putting yourself front and center. Furthermore, you’re not hiding behind anything. So, for every ad, use your face.

Also, why not at one point in time, look down? Why should you look down? Because that’s where people click too. So, not only using a person’s face but storytelling with that face is going to greater encourage the audience to have deeper engagement with your ad.

“Use a micro influencer.”

Now, this is even cooler. Having a face is awesome. How can you be able to increase that potential? Why not use an influencer? Somebody who the audience has already gained trust from.

Now, typically with paid social, this is going to be your audience’s first touchpoint with your brand. So, they may not know who you are. They probably don’t know who you are, but they know an influencer.

With that influencer, they’re going to be more likely to trust your brand. So, you don’t have to get a Tom Cruise or a Kevin Costner to market your product or service. Use a micro influencer.

We’ll get into this in another time, but Facebook’s algorithm or these social media algorithms are able to actually detect those influencers’ followers on these platforms, and you don’t have to do anything.

If they have a large enough following and a large enough engagement, Facebook is going to be able to identify those people who are more likely to engage with the ad because they have that familiarity, and that’s going to help with future targeting as well.

So, lead with the face, and you’re going to be able to capture and get the audience engaged at a much higher level with your ads. Especially since you’re paying for every single impression, you can’t stop an audience from scrolling, and you’re just burning cash.

That is one of the biggest things that you can be able to do to give you that lift you need in order to get a positive ROAS or increase your ROAS too. Awesome. So, use faces.

Now, we’re going to be critiquing three different home decor videos this time, and evaluate which one is best. I did look at these a couple days ago, and man, these are good ads.

Remember, by the way, we are looking at these ads underneath an acquisition lens. So, is the audience likely to not just have a good feeling about the brand but actually click and become a customer?

The first one that we’re doing is for Crate & Barrel.

That’s not too shabby at all. They don’t use a human face though. However, it’s good storytelling. If they used a human face, whew, if they use an influencer there, whew. That actually gives Crate & Barrel relevance to the audience.

Well, let’s get into the next one, Pottery Barn.

“Your oasis awaits.” All right. I didn’t do this on the first one. I might go back and do a little bit of cutting up on it, critiquing it.

By the way, it’s much easier to critique than to create, so much kudos to the first two!

Let me go volume off so we can be able to look into it. “Summer in style.” Good. “A breezy table.” Good storytelling. “That summer glow.” “Rustic accents.”

Let’s go back to the first one. I did not do a deep critique on that. All right.

One thing that I have in a critique here is it looks like that. If you’re listening on audio only, they have a person in this video. I’m pretty sure that may be relevant to who this ad’s for — Leanne Ford. That probably is Leanne Ford.

However, they’re really missing out on using an influencer because they’re not leading with her at the beginning. The image makes it kind of hard to be able to see her. If you can have more of just a zoom in on the face, ooh, it would be more noticeable. That’s really where it lacks for me.

It’s creative. Aesthetically, it’s beautiful, but beautiful doesn’t always sell. It’s tough. I hate that too because I go through that, the same thing where this is absolutely beautiful but it’s not going to sell. Have Leanne Ford’s face front and center, and you’re going to have a better ad.

By the way, it’s not that I don’t like that video. I really do. There’s just a couple things that they can be able to change around.

Then, this last one is Citizenry. Let’s get into it.

I understand that this is more branding. They’re not giving acquisition.

It’s more of aesthetic that’s being put forth as the other ones were. It doesn’t tell you what the benefit is necessarily. Just the visual beauty is going to portray the value or portray what that benefit is.

However, it’s on the boring side. It doesn’t tell me anything really exceptional about these linens, and the aesthetics are not at the level of beauty that the previous two were. So, that’s why I would put this one at number three.

Number one is Crate & Barrel. I like the way that they do the storytelling. It could be a good ad if they used her face in the beginning. Also, something that wasn’t brought up earlier is they’re just using images of her. If they could have had a video of her, just like a three-second video that starts it off, that’ll get them better aligned with what the product is because it’s her. Imagine, it’s her product.

So, Crate & Barrel at number one, Pottery Barn at number two, and The Citizenry at number three. Let us know what you think in the comments below, and we’ll talk to you guys later! This has been Straight Facqts. Peace.

That’s why your ad needs a face!